skip to main | skip to sidebar

Wayne Thiebaud is a painter and printmaker from the Pop Art era who takes objects and ideas from popular culture, along with other known artists like Andy Warhol, and inverts them in his own way.  Though Wayne Thiebaud and other Pop artists like Warhol were contemporaries, their work draws very different visual experiences of often similar inspirations.  While Warhol sought to flatten objects with uniformity and a methodical detachment from his work, Thiebaud uses thick impasto in his paintings as well as different layers in his printing to create a feeling of depth and personal touch. 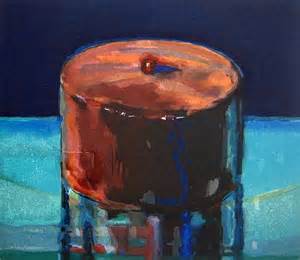 One piece that illustrates this point is Thiebaud’s Dark Cake from 1983.  Though many have believed otherwise, this work is actually a woodcut printed with water-based inks rather than traditional oil-based.  This gives the cake the appearance of a moist exterior, almost dripping down to the plate.  The cake’s layering of color and use of color to frame the shadows and edges helps create a strong three-dimensionality and a painterly feel.  In contrast, works by Warhol are often screen-printed using flat plains of color layered in flattening way.  Warhol and his followers sought to take away the human element and create a detachment between themselves and their works.   His workshop was even named “The Factory.” 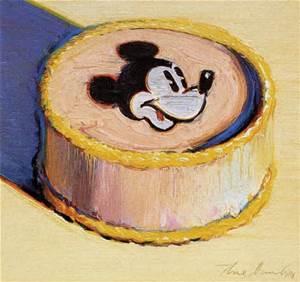 Another work that highlights this difference is in how the two artists dealt with the iconic character of Mickey Mouse in their works.  While Thiebaud painted Mickey Mouse’s head onto one of his signature cakes with a thick impasto, Warhol made prints of Mickey Mouse with a cool detachment.  Thiebaud’s use of the Mickey character is not surprising since he had worked previously with Disney in production, but his painting depicts Mickey in a more personalized way, traditional to the character.  Warhol rendered Mickey in a flatter way, using blacks and greys to create a colder, unfeeling character.  Though he often said his work did not have meaning, the piece can be read as showing the coldness of the fame “industry” and how the character itself does not hold any physical substance, it is only an image on the surface of the canvas. 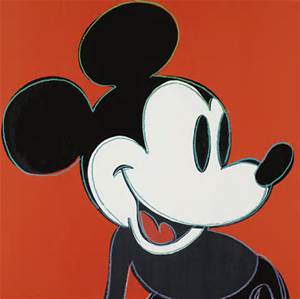 Falling in Love Again... Visual Artists Who Motivate Me

Music (I've played in class that you've asked about)

Films about Printing, Printmakers (some a bit tangential)